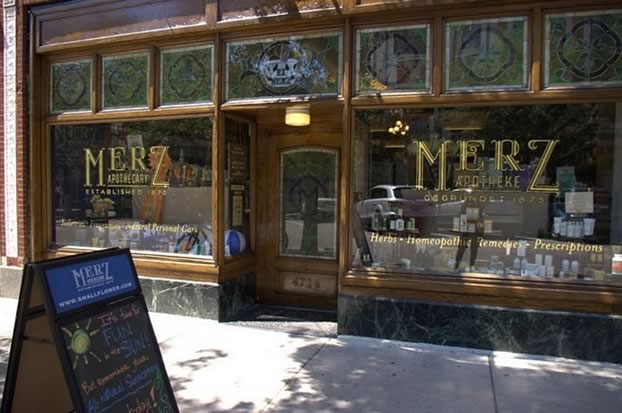 Peter Merz was a German-Swiss immigrant who founded the original store in 1875. The apotheke/apothecary in Germany was not just a drugstore where one went to get a rememdy — it was more of a gathering place where people came to converse with others. This is the kind of place Peter Merz wanted his apothecary to be. One of his sons took over the store and ended up selling it in 1972 to the current owner, Abdul Qaiyum, a pharmacy graduate from Pakistan who heard about the sale through friends of his in-laws. The current owner purchased the apothecary from Merz in 1972, and it the apothecary continues to serve as a place where people can engage in conversations about wellness. Merz Apothecary is also branching out through online sales with their brand, “Smallflower.”

When Abdul was growing up in Pakistan, his uncle had a chemists shop around the time that patented medicines were making their way to south Asia. He would prepare tinctures (alcoholic extracts made with herbs, often for medicinal purposes — one uses a solvent like ethanol, ether, or vinegar), and Abdul spent a lot of time in the shop watching him do this and interacting with clients. As a pharmacy student, he grew frustrated with the limits of the pharmaceutical and insurance industries and realized he would rather run an apothecary. In his own words, "The majority of symptoms today are emotion-based, and clinical trials don't take into account the unique composition and environment of the individual."

Homeopathy is a system of alternative medicine created by German physician Samuel Hahnemann in 1796. The central philosophy of homeopathy is that an ailment should be treated with a heavily diluted dose of an ingredient that mimics the ailment (commonly referred to as “like cures like.”) Though the homeopathic philosophy of treatment has been disproven in multiple scientific studies, its definition has broadened to include regional European herbal lore since its origins. Merz Apothecary sells Boiron products, a French company that is the largest distributor of homeopathic remedies in the world. The remedies are bottled in plastic vials and stored in Boiron-made drawers at the back of the store behind the counter and require a prescription for purchase.

The shelves in are lined with small cardboard circular containers which holds their most popular remedies: coltsfoot/horsetail/cilica (for hair growth), chamomile, lavender, and others. They also sell teas made from a combination of dried bark and leaves. These remedies come in two standardized sizes: 4 oz and 8 oz — the store no longer pours to order.

Glass display cases create a horseshoe around the perimeter of the store. In the display cases are herbal bath products and natural-based grooming products, including deodorants, toothpastes, hair products imported from Europe. There are dedicated displays for henna hair products, herbal-based perfumes, lotions, candles, bath salts and oils. There is also an entire display of "bitters" sold by a German brand that comes with a little souvenir: a painted green delivery truck containing bitters inside to deliver to customers.

See the slideshow below to see how Merz Apothecary receives and packages their herbs.

“Bitters” are a kind of product offered at Merz Apothecary. Bitters were popular in areas in Eastern and Northern Europe and often used as a remedy for digestive ailments. They are also used as tonics and flavorings for alcoholic drinks Traditionally, bitters are prepared with alcohol and a variety of botanical ingredients such as herbs, seeds, roots, bark, or fruit. Some common ingredients include orange peel, rhubarb root, and nutmeg. Thus, the flavor of ‘bitters’ is characterized as sour or bittersweet. Many of the herbs found in bitters are native to the Americas, though it is a tonic associated most with Germany and Switzerland. Bitters require a prescription to purchase at Merz Apothecary. 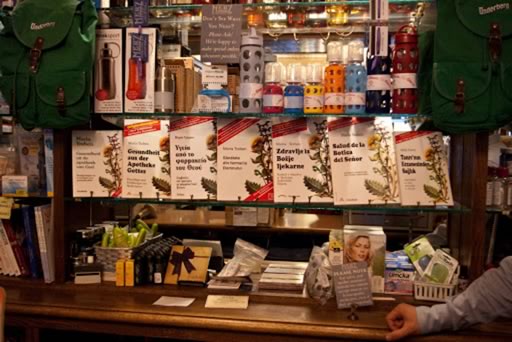 Display of Maria Treben's "Health through God's Pharmacy." This book is published in 27 languages. They sell 20 at the store. The languages shown here are Romance, Germanic, Slavic, Uralic, and Japanese and Turkish. See the collections gallery for a copy of the English version.

Treben's book is often used as a companion piece to Dr. Theiss Swedish Bitters products — also a top seller. When Treben published “Health through God’s Pharmacy” in 1980, she provided a bitters recipe as a remedy for many digestive ailments, and readers wanted to be able to purchase the bitters she described. Both Treben and Theiss got in touch with Merz Apothecary in the 1980’s to market their products side by side. Abdul says that Treben is a "folk herbalist," and that for many of his clients, her work and folk remedies represent a last tie to home. Aside from English, the translations of “Health through God’s Pharmacy” that are most popular are Romanian and Slavic languages. I purchased a copy of the book in English at the end of my visit. 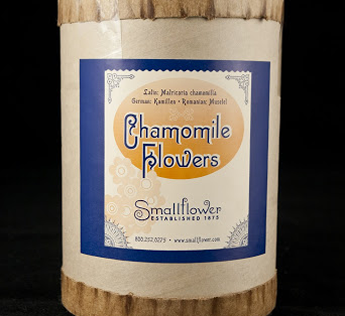