Amber is a third year college student studying public health and biology at UIC and currently lives in the North Side of Chicago, but frequently visits Uptown and Chinatown. She is interested in the connections between biology, psychology, and public health because they offer different perspectives on understanding how people navigate or deal with wellness and medicine.

Her family is from Guangzhou, a major city in the province of Guangdong, China. She is a second generation Chinese American. When she was younger she used to live in Uptown, close to the Pan Asian markets, and she frequently went with her grandmother after school to shop ingredients for making soup or an herbal broth. Herbal soups are an integral part of her family — they try to make a soup at least once a week.

Some of the common ones she learned include:

Amber also likes to drink Tieguanyin (鐵觀音 tiě guān yīn) or oolong tea (烏龍 wūlóng) with different herbs and flowers. Her mother made them often when she was a child. Amber usually brews tea in the morning before she goes to school. Here are the staple items she uses in her tea: 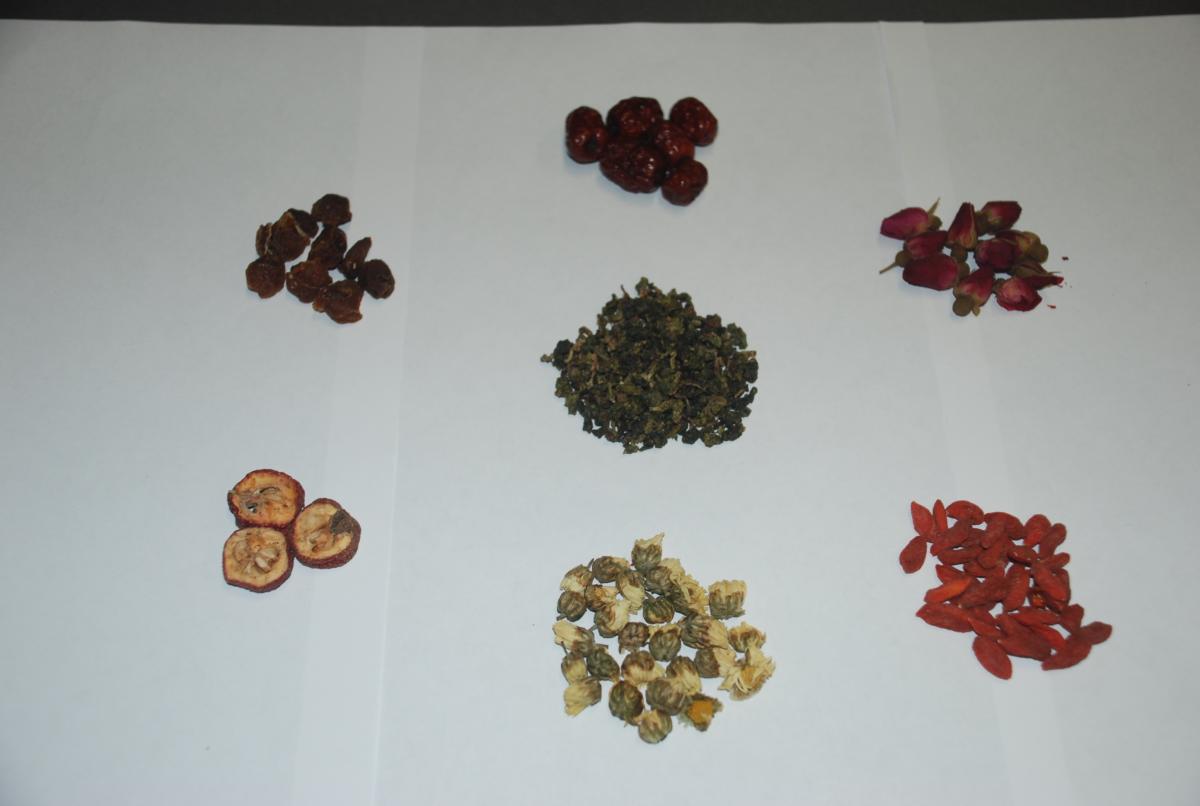 Amber learned about Chinese medicine and the concept of qi — a kind of spiritual energy in the body that must be kept in balance to maintain health. This balance is affected by lifestyle habits (such has not getting enough sleep, too much stress, or working too much), the environment, and diet. It’s about exploring how to find the balance that is optimal for you.

Amber says that “everything you do affects your health,” whether it is a food, a behavior, or a medicine.

Her grandmother says first you you need to know if the person is inherently hot or inherently cold so you can adapt your diet to these traits. She says you would know based on the food you eat and how your body reacts to it. One example is if you eat longan fruit or ginger, both considered to be ‘hot,’ you may feel like your throat is sore or your mouth is dry. Those are some of the symptoms of having an excess of hot qi. To balance it out, you should eat more foods that are cooling, such as winter melon or drink a cooling tea (涼茶 Liáng chá) which is brewed with herbs like chrysanthum and can be sweetened with raw crystal sugar or black sugar. Something as simple as drinking chrysanthemum soaked in hot water can help balance out hot qi.

Cooling tea (涼茶 Liáng chá) is often brewed. Amber’s grandmother brews it once every couple of months. Amber learned how to brew the teas from her grandmother as well as from her relatives when she visited them in China.

She notes that in China you can brew your own tea or you can buy them in speciality herbal tea shops. These tea shops brew soups as well as teas that are sold warm or chilled in bottles. Some soups and teas have an extremely bitter taste, so the they are often sold with little candies or sweet dates. So, after drinking the bitter tea, you can eat something sweet to get rid of the taste.

Cooling teas and soups are just every day ways to maintain wellness. This knowledge is learned through casual conversation brought up at the the dinner table or through talking with relatives during high tea (going to the restaurant to eat dim sum). Often times, Amber’s family would learn from friends or relatives that a certain item, like hawthorne, is good for health. Then, they would look into it further by researching online or in medicinal books that they have their relatives send over from China.

Amber says that health trends in China have influenced her relatives in China. Now, cordyceps (冬虫夏草 Dōng chóng xià cǎo, scientific name: Cordyceps militaris) is a popular ingredient to put in herbal broths and soups as well as in food dishes. This has influenced Amber’s family's use of it in soups as well, and cordyceps can be bought in Chinatown in Chicago.

One way Amber’s family has influenced her relatives’ cooking is the use of dried figs (無花果 wú huā guǒ). Amber’s mother says they are rich in vitamins and fiber, and according to Chinese medicine, help relieve coughs and cleanse the intestines. Amber’s mother usually buys the Greek figs in the Polish markets in Chicago. In phone conversations, she talked about it in passing. Now, her relatives use it more often in their soups. When she visits China, her relatives always asks her to bring some Greek figs because they taste better than the dried figs they can find in their local markets.

For Amber, Guangzhou food culture is an interesting perspective in understanding health and eating. Her family, friends, and other relatives in China emphasize eating fresh because it tastes better and it’s good for health. Even in Chicago, with her family’s busy schedule, her mother and father always try to buy fresh vegetables and fruits, rather than buying in bulk to refrigerate.

Amber notes that a lot of the herbal items are used in everyday food dishes and is a part of the food culture in China. Amber’s relatives in China and her family in Chicago plays a big role in shaping her eating and cooking habits.

Her family’s cooking style is influenced by their background in Guangzhou cuisine. They cook dishes that are low in sodium and fat and they eat very little meat. Usually, her mother doesn’t make a dish with just meat — dishes are mainly vegetables with a little bit of meat mixed in. Sometimes depending on who is free, each member of the family works on making a different dish for dinner, so Amber has observed how her mother’s, father’s, and grandmother’s cooking styles differ.

For example, her father often blends Chinese and American spices or sauces for chicken dishes and for salad dressings. Usually, her grandmother makes the herbal soups, while her mother makes vegetable dishes using gai lan (Chinese broccoli) or yu choy (Chinese greens). Some of the foods her family likes to make are steamed fish with ginger and soy sauce, steamed chicken with mushrooms, and various vegetable dishes with oyster sauce, soy sauce, and sesame oil.

During the weekends, they like to make congee, a rice porridge. A cooling congee that her grandmother likes to make contains herbs and regular food ingredients such as red beans, tangerine peels (陳皮 chen pí), and pearl barley (Yì mǐ, 薏米, scientific name: Coix lacryma-jobi). The blend of ingredients for this particular congee is good for the throat, reducing hot qi, relieving cough, and improving digestion.

Perspective of Health and Wellness

As a student aspiring to go into medicine, Amber thinks it is important for physicians to approach health from a background that includes multiple perspectives, like public health in addition to the biological discipline. For Amber, health and wellness is more than symptoms and illnesses — it encompasses psychological and social conditions, like stress and social networks. Amber's notions of wellness are influenced by her family as well as the understanding that there are complex issues that affect each person’s approach to health.