Below is a recipe for rasam, a kind of soup that is a staple at dinner and a favorite cold remedy for Raj and Meghana. See the collections gallery to learn more about the ingredients.

Life As A Graduate Student

When he first immigrated to the US, he struggled to find and cook foods he was familiar with from back home. When he found it difficult to get Indian spices and herbs, he asked his parents to send him a pre-mixed concoction called sambhar podhi (curry powder) which he put into all his dishes. To this day, he receives packages of his mother’s sambhar podhi and uses in his cooking. As a graduate student living on a tight budget, he often found himself eating unhealthy fast food, which he said he later came to regret. Growing up in Chennai, he wasn’t used to having easy access to fast food and wasn’t aware of its health risks — like many immigrants, he ended up gaining weight as a graduate student before he became conscious of nutrition and exercise.

Since he grew up in a Brahmin neighborhood in Chennai, his mother decided to raise her family as vegetarians in the hope her children would also experience success and status. (Brahmins belong to the most privileged caste and are known for their strict vegetarian diets.) Raj felt that this diet, along with the Hindu belief that natural foods are better, raised him to believe that vegetables and unprocessed foods have enormous health and energetic benefits. Raj’s awareness of ingredients in foods changed greatly from Chennai to Chicago. When he was younger he didn’t really think a lot about what he was eating, but because he had to adjust to a new food culture in the United States, he grew more aware of the nutritional value of food. “As an immigrant, this is what you do — your mind is always connecting what you learn in the new place to what you already know.”

Now he says he has returned to cooking and consuming a diet more similar to what he would have had at home:  a diet rich in diverse vegetables, spices, and herbs. For Raj, “vegetables became a way to consume spices” which he has found very beneficial to his health. He also says freshly pressed fruit juices and yoghurt drinks that were always consumed to manage body heat are still important for his health today. 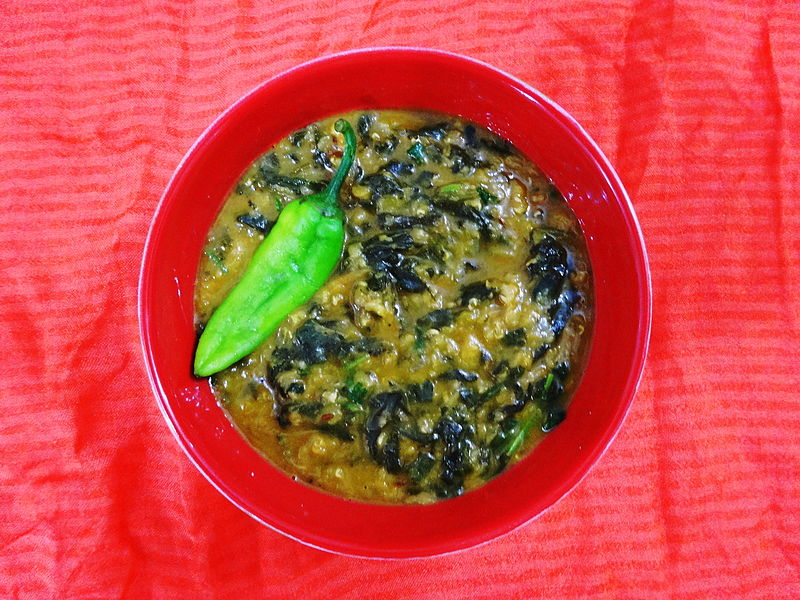 “Quick” or masoor dal (lentils) made with spinach- a high energy food that Raj makes.

When Raj gets sick, he makes a kind of chai (spicy tea) with turmeric, cloves, cinnamon, and cardamom. He also consumes spicy mulligatawny (pepper water) soup with many vegetables and foods containing a lot of ginger and turmeric. He was exposed to habitual exercise from a young age by his father, who still enjoys playing badminton and tennis to this day. In the last five years, Raj has taken up tennis and now plays with friends he has bonded with on the court to play almost fifteen hours a week. He feels that while healthy role models are important, good habits and a healthy lifestyle is not something that is passed down but is consciously decided by an individual on their own terms.