Eva is a college student majoring in Public Health. She is a second generation Chinese American who lives in Chinatown with her family. In her studies, Eva is interested at looking at the holistic picture of health and wellness, especially through the lens of community health.

Her family is from the Guangdong province in China and she learned about Chinese herbs and soups through her grandmother. When she was young, she often went to a traditional Chinese practitioner in Chinatown to get herbal packages and accompanied her grandmother to acupuncture sessions. Out of her entire family, her grandmother has the most knowledge of Chinese medicine. When she was young, Eva used mostly herbal packages for ailments. Now, Eva and her parents use a combination of Western medicine and Chinese medicine. For Eva, Traditional Chinese Medicine (TCM) is a long term treatment that accounts for health in the context of holistic wellbeing. On the other hand, Western biomedicine is a fast acting treatment that accounts for specific symptoms or a specific illness, such as an antibiotic to treat a specific bacterial infection.

Eva's family eats rice, lots of vegetables, chicken, and steamed fish. Eva says that her family emphasises the use of fresh ingredients and cooking at home rather than going out to eat fast food.

Eva notes that in Guangdong food culture, soups are a large component of cuisine and often incorporate Chinese herbs. Thus, soups are present in many dinners, and the most common soup her family cooks includes chicken, beans, and mushrooms. The type of soup made depends on the body's balance of hot qi and cold qi. For example, if someone has a sore throat, this indicates that the body has excess ‘hot qi’ and they should avoid drinking soups or eating foods that are considered ‘hot’.

Hot qi (literal translation: ‘hot air’) in Traditional Chinese Medicine is not referring to relative temperature. Qi (pronounced chee) refers to life force or the body’s vital energy. In Chinese food culture, people can categorize foods according to their attributes of hot/warm and cool/cold. Understanding and preparing the right foods under certain circumstances of qi imbalance is a way to restore this balance in the body.

In the context of Chinese culture and Chinese medicine, food taboos are rules, dietary regulations, and restrictions about what foods or combinations of food should not be eaten under certain situations. Some food taboos that Eva has learned through everyday conversation with her grandmother and mother include:

Eva says that her eating habits are influenced heavily by her culture and her family. Her grandmother’s and mother’s habit of incorporating a lot of vegetables and using as little salt and oil as possible has led her to avoid consuming them in high quantities.

Eva's grandmother and mother practice Qi gong (氣功), a holistic exercise incorporating movement and meditation. Eva's grandmother learned and practiced Qi gong in China. She continued to do so in Chicago and attended workshops when Qigong masters offered classes in Chinatown. Although Eva hasn’t learned Qigong, she hopes to learn it in the future.

Her staple item to have on hand is white flower oil which has a variety of uses. It is applied on the skin for relief of muscle pains, headaches, neck aches, stomachaches, and to clear sinus pressure and nasal congestion. 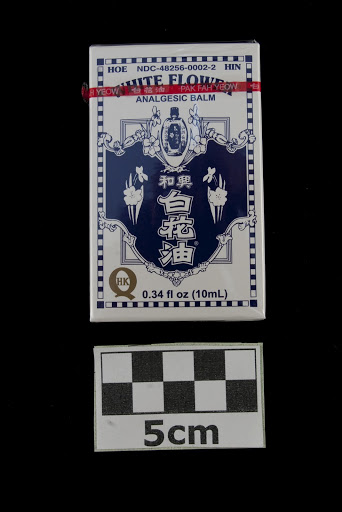 For Eva, it is an important item because white flower oil has “transcend[ed] among all generations” from her grandmother’s generation to Eva's generation in America.

Perception of Health and Wellness

For Eva, health and wellness encompasses physical and psychological aspects. One big example is Qigong because the exercise incorporates physical movements as well as meditation - exercising the mind and the body. When Eva doesn’t feel well, she tries to “take a step back” to see ways she can maintain a healthy lifestyle, like ensuring she gets enough sleep during a busy semester and drinking herbal teas.